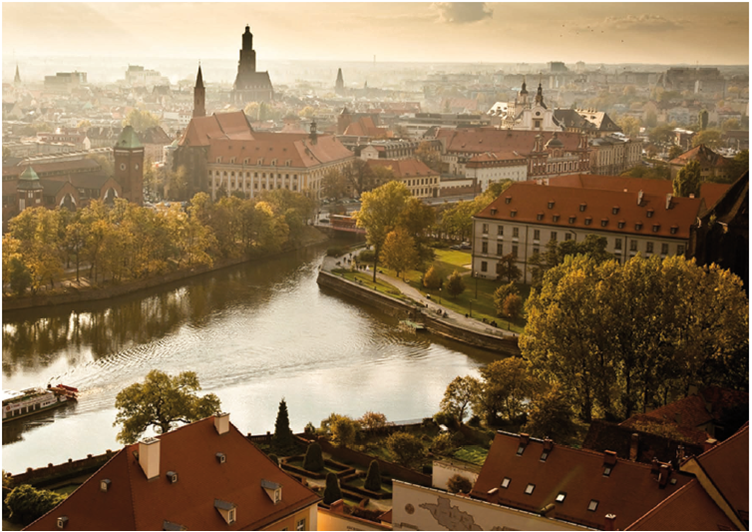 Wroclaw is the fourth biggest city in Poland in terms of number of inhabitants (approx. 630.000); it’s the capital city of the region Lower Silesia with 3 million inhabitants.

The city benefits from a very good geographical location: 150 km to Germany, 100 km to the Czech border; in a radius of 300 – 350  kilometres there are a few important European metropolises  – Berlin, Prague and Warsaw.

Wroclaw is one of the first Polish cities fully integrated with the European motorway system (it takes less than 4 hours to get to Berlin). The city has a modern airport terminal offering more than 50 European destinations: Malta, Germany, Great Britain, Ireland, Norway, Sweden, Denmark, France, Italy, Spain and some more. In other words the city is easily accessible from all over Europe.

Wroclaw is characterized by a complex and vibrant history of more than 1000 years. The city changed hands many times in course of history: it used to be Polish, Bohemian (Czech), Austrian (Habsburgs), Prussian, German city and after the WW 2 Wroclaw became a Polish city again.

After the WW 2 Wroclaw was a sea of ruins. What is absolutely unique about the city: by virtue of a decision of the Allies there was a 100% exchange of population after the War. German population were expelled to West Germany and Polish people from the territories that belonged to Poland before WW 2 were expelled as well and came to Wroclaw. So this city is a place of newcomers which contributes to the very open and tolerant atmosphere in the city.

In the 80s Wroclaw was a stronghold of the Solidarity movement (some historians claim that Solidarity in Wroclaw was at least as strong as in the cradle of the movement – Gdansk). This social mobilization of the inhabitants contributed strongly to arising of the Wroclaw identity, which – as you can imagine – needed to be built from scratch after WW 2, when people from all parts of Poland came to the city.

Solidarity brought freedom to Poland and played crucial role in dismantling the Iron Curtain dividing Europe. Another milestone in the after war history of the city was EU accession in 2004. Joining the family of free, democratic countries of Western Europe opened a new chapter in the history of Wroclaw, a period of growth and development.

Today Wroclaw is the second strongest economic centre of Poland after Warsaw. We managed to attract many renown companies to Wroclaw representing the sectors of IT, automotive industry, electronic and household appliances and the so called BPO (Business Processes Outsourcing) providing big multinational companies with IT and financial services. From 2004 till 2010 investments with the value of approx. 5 billion Euros were attracted to Wroclaw. This together with the growth of Polish small and medium sized companies gave a boost to the economic development: more than 100.000 new jobs were created and the unemployment decreased dramatically from 13,9% in 2003 to less than 4% today.

Synergies with academic world are created by the cooperation between universities with the European Institute of Technology+.  This modern research institution links research, education and business. It focuses on biotechnology, nanotechnology and climate. The goal is to commercialize state-of-the-art solutions to Polish and European partners.

Talking about the academic traditions of Wroclaw it’s worth mentioning that 10 Nobel Prize winners were associated with Wroclaw University in the German times (before WW 2).

Wroclaw is a city which undertakes huge international projects. To mention some of them:

3 games were played in Wroclaw; a new stadium with capacity of 44.000 places was built. Apart from that EURO 2012 brought many infrastructural improvements: motorway bypass, new airport terminal, roads, hotels etc. The project was also important for the inhabitants’ pride – the city is not the same in the positive sense.

Regarded by many as the most important project in the after war history of Wroclaw. 400 projects, 1000 events, artists from all over Europe. ECOC means strengthening of the image, development of the cultural life (both new infrastructure and events), extension of international networks of artists, a boost to cultural tourism (we managed to double the number of tourists from 2.5 to 5 million), increase in the participation in culture and enhancement of the creative industries (film, computer games, design, advertising, …)

Wroclaw is a nice place to live also for numerous expats. It is a young city with thousands of students which shapes the atmosphere in the city. You can see architecture from all centuries, whereby “specialties” of Wroclaw are gothic (there are approx. 20 gothic churches and gothic city hall in Wroclaw) and modernism architecture, where especially the Centennial Hall, the Wroclaw UNECO monument, a huge reinforced concrete dome structure built in 1912 by the famous German architect, Max Berg. The city is full of parks and green spaces and what also makes the city absolute special are the bridges: there are no less than 120 bridges in Wroclaw (no. 4 in Europe after St. Petersburg, Venice, Amsterdam) and 12 islands. The cultural life is vibrant, there are numerous theatres, opera, cinemas (among cinemas the biggest Art House in Europe “Helios” – no ads and no popcorn), galleries, museums and festivals.